Get fresh music recommendations delivered to your inbox every Friday.

"SCUM / THE SOUND OF MUSIC" 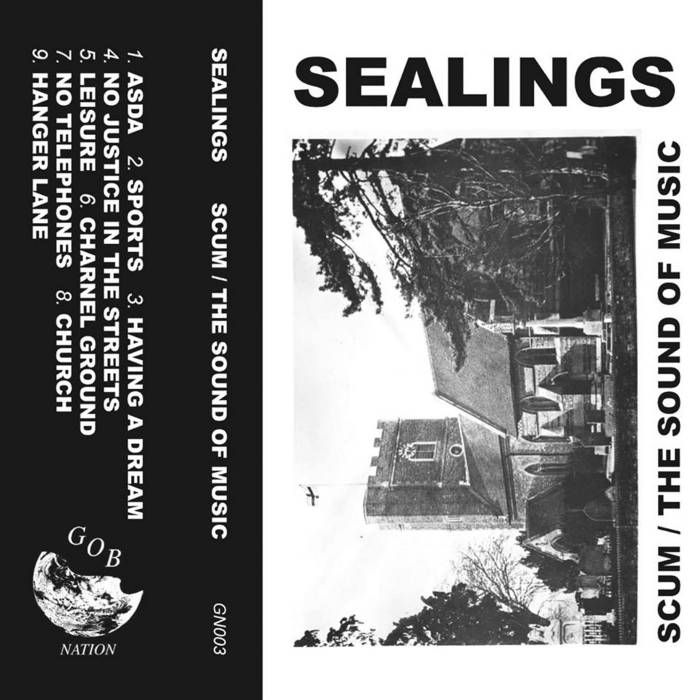 "Sealings’ often feral live performances, once described as being ‘based more on confrontation than anything else’ have long been unhelpful when addressing their recorded output. If 2013’s two-track 7” ‘My Boyfriend’s Dead’, featuring brutalist electronic shoegaze as well melodic noise-pop wasn’t clear about their diverse intentions, then 2015’s debut full length ‘I’m A Bastard’ hammered the point home

An all too long three years later and they’re at it again, merging the familiar with the unfamiliar on new Gob Nation released tape ‘Scum/ The Sound of Music.’ Lead video ‘Sports’ has a synth pop lightness about it, like Suicide 2 or a darkwave Sparks, tipping the hat to drummer and programmer Scott’s involvement in The Pheremoans. ‘Having A Dream’ is a two minute electro-punk gem reminiscent in structure and intent of another stalwart of the UK underground, Cowtown. Aptly named ‘Charnel Ground’ is heavy-footed gravegaze of the highest order, woozy and punchdrunk, desperately dragging itself to A&E, with more than a hint of the horror soundtrack about it. Album closer and highlight ‘Hanger Lane’ stands tall as their first, and perhaps only, dubplate.

Those that came for the noise-punk are also in luck. Opener and recent live staple ‘ASDA’ serves as a showcase for the instantly recognisable slashing and burning guitar work of Michael Cotter, whilst throughout the likes of ‘No Justice In The Streets,’ Liam’s urgent basswork threatens to take physical form and the drum kit is surgically manhandled in a manner more familiar to those lucky enough to have caught the Brighton 3-piece live" - James Mclarnon, Brighton Noise

"Played some of the best, and worst, shows I've ever seen" - Dan Reeves, Faux DIscx

Bandcamp Daily  your guide to the world of Bandcamp